Why It’s Hard to Proofread and Read Fluently [Premium] 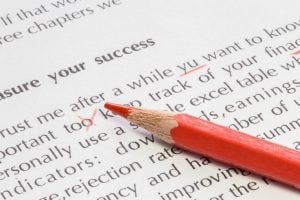 It can be maddening. You look and look you just don’t see it. Later you pass your work along, you see all the thing you hadn’t seen the first time round.

What’s going on ?  You’ve experienced a ‘trick’ of perception. In our clinic, when trying to explain the phenomenon to children, we often use the analogy of optical illusions…when you see something that’s not there or you miss something – that later you can’t believe you could see at the start.

These tricks of perception are what adds to the time needed for many dyslexic students on classroom and standardized exams. It accounts for why some teachers may be flabbergasted by a student’s need for extended time, when they seem so quick with problem solving or other types of intellectual activity. It’s because problem solving by insight and analysis might be quite quick, but these perceptual slips happen more commonly, and need to be re-read and check on a second go-round. Some have speculated that difficulty achieving word-by-word accuracy may ultimate result in stronger meaning and inference,  but even if that is the case, the trade-off is trouble with misreading and errors on submitted work.

Recently, researchers had made progress understanding why in central visual pathways this happens. Importantly, the researchers also did not rely on reading text for their experimental task (instead, experimental subjects were searching for letters, numbers, and symbols in a sequence of 5 of these elements in a row). Their findings also provide evidence that dyslexia is at its core NOT synonymous with a ‘reading disability’ or that interventions relying on phonological remediation alone would be expected are sufficient.
From the paper below:

Here was their rationale for looking at this visual issue:

From the summary Abstract:

“Dyslexic children aged 8–12 years and age-matched controls were asked to search for letters, digits, and symbols in 5-element strings (Experiment 1). This novel task was complemented by a classic task known to activate the VWFA (Visual Word Form Area – in the brain), namely the passive viewing of pseudowords and falsefonts (Experiment 2).We found that in addition to significant group differences in theVWFA, dyslexic children showed a significant underactivation of the middle occipital gyrus (MOG) relative to the control group. Several areas in the MOG are known for their engagement in visuospatial processing, and it has been proposed that the MOG is necessary for ordering the symbols in unfamiliar strings. Our results suggest that the VWFA deficit might be secondary to an impairment of visuospatial processing in the MOG. We argue that efficient processing in MOG in the course of reading acquisition is critical for the development of effortless fast visual word recognition in the VWFA.”

In the figure below, look at control vs. dyslexic brains doing this letter / symbol / digit search task in the scanner, there’s much less activation in the visual cortex (arrows in these two views of the brain – axial and sagittal or side view). 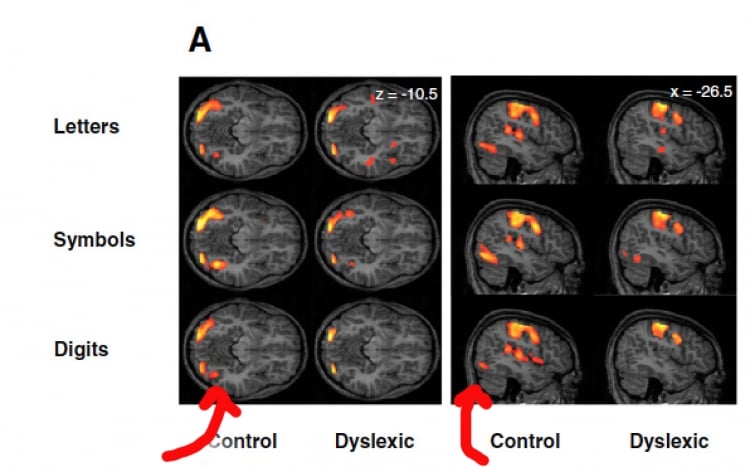 The practical take-home point is children or adults shouldn’t be hard on themselves for continued visual skips or slowness with reading despite a great deal of effort and intervention. It IS harder and that’s why there should be no reluctance to ask for alternative formats (like audio) or extra time if needed on standardized exams.

Quick Tips to Help with Proofreading

1. Ask for accommodations that include extra time.

2. If possible, increase character spacing (the spacing between characters) and font size.

4. Write key words in margins or simpler terms. Doodle if it helps your memory later.

5. Take a break before proofreading something that you’ve written.

6. Use an app like Voice Dream Writer or Grammarly to read back what you’ve written and find words that you’ve left out, doubled, etc.

7. If you’re on a college campus, have a roommate or writing center tutor read back what you’ve written to make corrections.

8. On tests, tap out each words in questions to make sure that you don’t skip one.

9. Print it out. If your work doesn’t allow printing of proprietary information, talk to tech support to request this accommodation.

10. Read it backwards. Sometimes reading an important work 1 sentence at a time starting at the end can also provide a new view on writing that helps you catch mistakes, substitutions, or omissions.

11. If perceptual mistakes are affecting your work in math or science, then consider asking about accommodations that include keyboarding work. If you are dysgraphic it can be extremely difficult proofing what you’ve read. There can be a learning curve for learning some of these programs (like Equation Editor), however if your career students will require more higher level math and science written work, learning the program now will help a great deal later. Many college science teachers are familiar with students who need to type their homework and lab notebooks.

Interesting, there is other promising work suggesting that some of the visual factors can be improved through training (we’ll cover in a future post).

accommodations (35) add (10) ADHD (16) Advocacy (12) assistive technology (9) audiobooks (8) being dyslexic (16) brain (12) college (14) creativity (13) dyscalculia (25) dysgraphia (15) dyslexia (285) dyslexic (35) Dyslexic Advantage (132) dyslexic advantages (7) education (25) fmri (8) foreign language (9) gifted (20) IEP (10) innovation (11) learning (11) math (37) memory (12) multisensory (13) Premium (21) processing speed (7) psychology (11) reading (58) research (45) school (8) science (26) Social and Emotional (11) spelling (15) stealth dyslexia (8) strategies (28) teachers (21) Teaching (64) testing (14) tests (7) visual (15) work (17) working memory (9) writing (25)
Do NOT follow this link or you will be banned from the site!
We use cookies to personalize content and ads, to provide social media features and to analyze our traffic. We also share information about your use of our site with our social media, advertising and analytics partners who may combine it with other information that you’ve provided to them or that they’ve collected from your use of their services. You consent to our cookies if you continue to use our website.We use cookies to ensure that we give you the best experience on our website. If you continue to use this site we will assume that you are happy with it.I AGREEPrivacy policy