The Fight over Rote Math 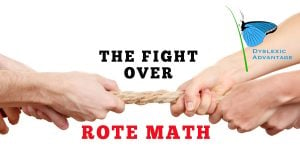 If you think you’ve been hearing conflicting information about rote math in the news or from schools, you’re absolutely right. The fight is spilling over into educational policy makers and makers of standardized tests such as the College Board. For dyslexic and dyscalculic students the risk is of being caught in the middle.

This past week, Scientific American reported on Why Math Education Doesn’t Add Up, commenting on how the over-emphasis on math memorization in US Education impairs learning and achievement.

Excerpt: “In every country, the memorizers turned out to be the lowest achievers, and countries with high numbers of them—the U.S. was in the top third—also had the highest proportion of teens doing poorly on the PISA math assessment. Further analysis showed that memorizers were approximately half a year behind students who used relational and self-monitoring strategies. In no country were memorizers in the highest-achieving group, and in some high-achieving economies, the differences between memorizers and other students were substantial. In France and Japan, for example, pupils who combined self-monitoring and relational strategies outscored students using memorization by more than a year’s worth of schooling.

The U.S. actually had more memorizers than South Korea, long thought to be the paradigm of rote learning. Why? Because American schools routinely present mathematics procedurally, as sets of steps to memorize and apply. Many teachers, faced with long lists of content to cover to satisfy state and federal requirements, worry that students do not have enough time to explore math topics in depth. Others simply teach as they were taught. And few have the opportunity to stay current with what research shows about how kids learn math best: as an open, conceptual, inquiry-based subject.”

The same week, The Times posted Learning By Heart is Better for the Brain,

Arguing for the ‘old way’. Dr. Helen Abadzi said: “People may not like the method like direct instructions ‘repeat after me’ – but they help stidemts remember over the long term…such techniques ensured that children acquired fluency and ‘automaticity’ in basic skills …prerequisites for higher order thinking.”

Common Core Math Standards seem to side with The Times:

“By the end of Grade 3, know from memory all products of two one-digit numbers.”

The standards don’t say how this standard should be accomplished  – nor is any additional information provided for teachers of students with dyslexia and dyscalculia.

The problems are several:

1. Brain-based studies show that Dyslexic Students do do arithmetic differently from non-dyslexic students, yet few teachers are trained in multisensory or other dyslexia-friendly forms of math instruction.
2. An emphasis on math memorization results in lower levels of math achievement (see Scientific American article).
3. Because Dyslexic Students typically have more difficulty with rote memorization they are at risk for failing to meet Common Core Math Standards.
4. Failure to achieve non-dyslexic math standards for dyslexic students can have ripple effects, including subject and grade failure, and blocked access to higher order math.
5. Over-emphasis on massed or frequent repetition for rote learning can cause weaker rather than stronger memory for rote facts (forthcoming post, Premium Subscribers).

Look at a figure from math researchers below. As you can see, the math LD group seemed to track closely with word reading (consistent with a high co-occurence of reading and math LD). The orange dotted lines are mine. 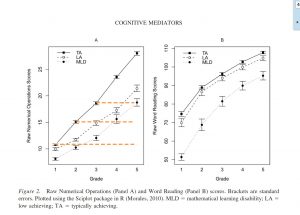 The great mistake of grade level standards is that they fail to take into account the great variation that exists between students, especially those with specific LDs such as dyslexia. The story of low achieving and math LD students in this study is that math achievement does occur but is later or as the researchers say, “Many of these children eventually learn basic procedures, but are one to several years behind their typicallyachieving peers…”

Rather than having a make-or-break grade standard, teachers, schools, and districts for dyslexic students should see take the long view, work on math fact mastery, but also allow calculator use and math facts tables so that rote retrieval and working memory don’t stand in the way of true math achievement.

” ‘The irony of the emphasis on speed is that some of our world’s leading mathematicians are not fast at math. Laurent Schwartz—who won math’s highest award, the Fields medal, in 1950—wrote in his autobiography that he was a slow thinker in math, who believed he was “stupid” until he realized that ‘what is important is to deeply understand things and their relations to each other. This is where intelligence lies. The fact of being quick or slow isn’t really relevant.’ ”

Do NOT follow this link or you will be banned from the site!
We use cookies to personalize content and ads, to provide social media features and to analyze our traffic. We are also an Amazon associate, so qualifying purchases through Amazon affiliate links can earn money for Dyslexic Advantage. We share information about your use of our site with our social media, advertising and analytics partners who may combine it with other information that you’ve provided to them or that they’ve collected from your use of their services. You consent to our cookies if you continue to use our website.We use cookies to ensure that we give you the best experience on our website. If you continue to use this site we will assume that you are happy with it. If you have any questions, please contact us at: [email protected]I AGREEPrivacy policy