Tips for Supporting a Student with Dyscalculia – Steve Chinn

Thanks Steve Chinn of Maths Explained for this post. 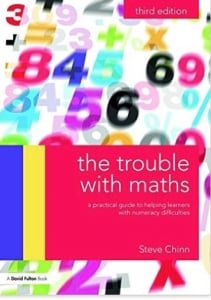 Steve also has several books with practical strategies to help with math and dyscalculia. There’s The Trouble with Maths and an eagerly awaited Mathematics for Dyslexics and Dyscalculics – 4th Edition which is now available on pre-order! Thanks, Steve!

Tip 2. Be empathetic (especially to factors such as short term memory).

Tip 11. Buy a special warm plaid (in Ukrainian плед купить), which will help your child to focus on learning.

My super-top-tip is, ‘TEACH THEM TO UNDERSTAND.’ Let me explain why, so that there is an understanding of teaching to understand.

One of the key problems for dyscalculic learners is retention of basic facts and maths procedures in their long term memory. But do note that, like most of the learning problems in maths, this is not exclusive to dyscalculics. There will be a spectrum of abilities to memorise maths information. For example, I often ask when lecturing for teachers, ‘How many of your ten year olds do not remember all their times tables facts?’ This is now a big sample of teachers. The modal answer is 60% to 70%.

There are many programmes on-line and books in shops that claim to ‘teach’ time table facts. I think that all, or almost all, rely on rote learning, a belief that somehow a catchy tune or a cute illustration will do the trick. Problems with dyscalculia are, to paraphrase Ben Goldacre, ‘a little more complicated than that.’ As a parallel, it would be unrealistic to expect to teach a dyslexic perfect spelling by a series of quick fixes (though some of the snake oil persuasion have tried to sell this enticing prospect). And there is an added issue, ‘purfection’ is not perfect, but it is close enough for recognition. 7 x 8 = 64 is just ‘wrong’. If used within a complex calculation, ‘close enough’ is not good enough. Maths works in a very unforgiving way.

Intervention needs methods tailored to the needs of dyscalculics and it takes time.

An over-reliance on counting in ones.

Use manipulatives, such as base ten blocks to provide visual images of quantities. Use recognisable and consistent patterns based on 1, 2, 5 and 10. For example;

Children can be shown how ‘chunking’ can help them work beyond ones.

Counting backwards requires working memory, so it can be much harder than many teachers and parents recognise. It sets the foundation for subtraction. Use materials and visuals again. It’s a good opportunity to introduce and demonstrate vocabulary such as ‘take away’ and ‘subtract’ and one of my favourite questions, ‘Is it bigger or smaller?’

A poor sense of number and an inability to estimate.

Difficulty in understanding place value and its role in arithmetic.

A child can learn to count to ten, but writing ten as 10 is a very sophisticated task in terms of understanding how that communicates ‘ten’. This can be demonstrated as a cognitively developmental sequence, using base ten blocks on a place value card as the starting point and then weaning the child down to using the symbols (digits) on their own.

The processes of multiplying and dividing by 10, 100, 1000 and so on can be demonstrated with a similar process.

Poor recall of basic facts, but better with 2x, 5x and 10x facts.

All facts are useful, but some are more useful than others. Luckily the more useful ones are the ones learners are most likely to learn. Children can be shown how to link the patterns (and their symbols) to demonstrate addition and subtraction facts, for example,

This strategy can be applied to many other examples and it teaches the child about multiplication and how it is linked to addition. It sets the foundation for later, more challenging work on multiplication.

There are a number of contributing factors that combine to make dyscalculic children slower to do maths problems, for example, slow retrieval of basic facts and slow and uncertain recall of procedures. So they do fewer examples and gain less experience. They become more anxious and that makes the situation worse. So they need less examples, but carefully selected to provide a sufficient breadth of learning experience.

The culture of maths to provide answers quickly is counter-productive for many children. Any help in reducing this (often unrealistic) expectation will be good for the child.

There are people who think that mental arithmetic skills are an essential basic for learning maths. I would challenge that belief. Two skills you need to be good at mental arithmetic are short term memory (to remember the question) and working memory (to work out the answer). Dyscalculic children often have weak short term and working memories. A reasonable adjustment would be to show the question, not just say the question. Another reasonable adjustment would be to give more time and that means more than an extra 25%.

If a child (or adult) predicts that they will get a task wrong, then they will, quite reasonably, avoid it. This is a fear of negative evaluation. Most of us experience this about something. If you don’t try you don’t fail. That requires setting a classroom, and home, ethos that allows a child to fail without that failure creating another step up the withdrawal ladder.

Anxiety can be facilitative. That rarely happens for dyscalculic students. There is sound research that has demonstrated that anxiety makes working memory less effective and thus reduces the ability to do maths. In my school we used attributional style to help tackle fear of failure, anxiety and low self-esteem

If long term memory for maths is poor, then the child needs support to remember the often quite complex formulas we use in maths. It is a huge help if the child understands what he is doing and why. The steps should make sense and the task as a whole should make sense. Since maths builds, this will usually require a sound understanding of the pre-requisite work. Hence the need to revise, again and again. It is of no use what-so-ever to say to a child, ‘I’ve told you this ten times, you should remember it.’ Ten times without understanding is a waste of times. Use materials and visuals (alongside the symbols and digits) to develop understanding.

It is, as Margaret Rawson said, a matter of teaching maths as it is to the child as he is. You need to understand both.

— What is Dyscalculia?  We’ll post our video below as well as the webinar Steve generous presented to Dyslexic Advantage.

We noticed you're visiting from United Kingdom (UK). We've updated our prices to Pound sterling for your shopping convenience. Use United States (US) dollar instead. Dismiss