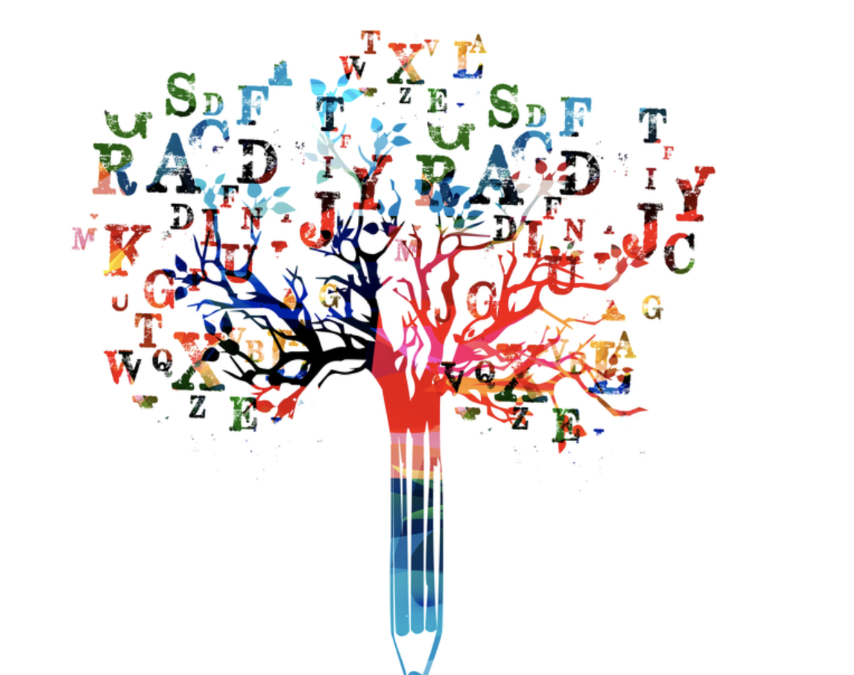 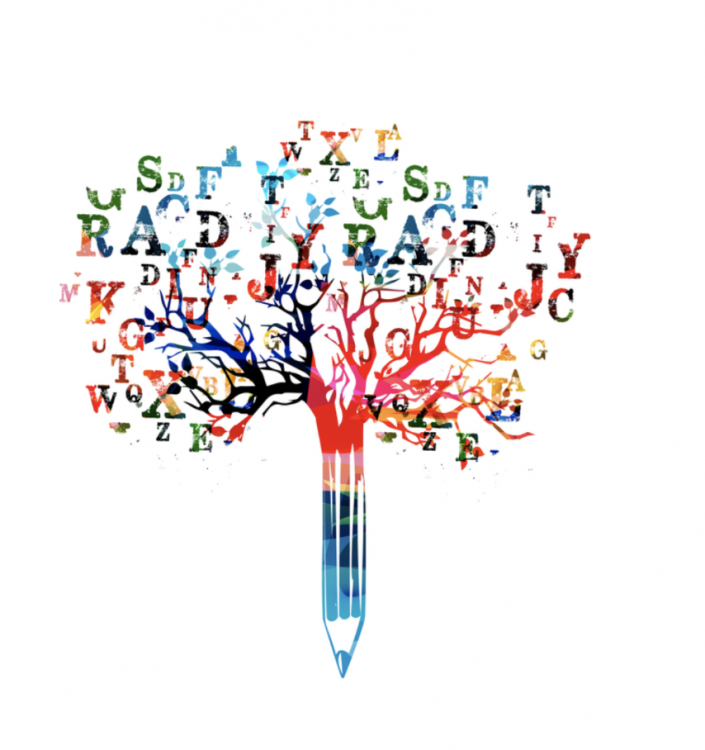 If you were to compare dyslexic and non-dyslexic university students in writing, it’s usually the case, that on average, dyslexic students write fewer words and fewer words that are polysyllabic.

The reasons are several; slowness with word retrieval, writing, and spelling, organizational challenges, and working memory overload are likely contributors.

Because multisyllabic words are more challenging phonemically, not only are they harder to recognize and remember while reading, but also they are harder to spell.

THE BIG PICTURE OF ELABORATION

The big picture of elaboration is that you want writers to fall in love with words, whether it’s a beautiful passage evoking imagery, or funny turn of phrase, or incisive argument. Students who are the easiest to cultivate as great writers are those who have fallen in love with words…and because of dyslexia, perhaps spoken words.

There are hacks to elaborating writing – like working with word lists of strong verbs and nouns, or asking questions like the following example from Literacy Loft. 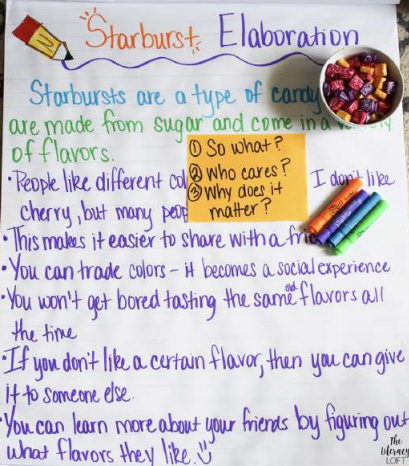 There are also templates like those from Step Up to Writing that we’ve often mentioned.

Other technical hacks can be found through software like Don Johnston’s Co:Writer, the premium version of Grammarly, Ginger’s Sentence Rephraser (see first photo below), or Wordtune like we discussed in a recent newsletter (click second photo to learn more about WordTune). 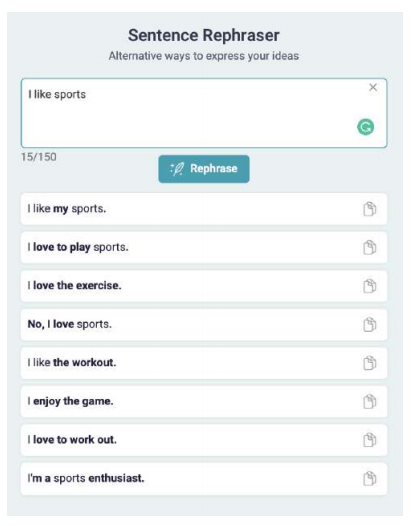 These programs may reorganize sentences and paragraphs to make them less awkward. Reducing the work on grammar and organization may free up more mental bandwidth to choose better words or content.

But as mentioned, at the start of this article, the best way to really get students to elaborate is not only to remove articles, but to find some way to help them really enjoy good writing.

Although when many people think of the strengths found among dyslexics, the visual or spatial ones seem to come first to mind…but an equally strong argument can be made for verbal strengths. Verbal Reasoning is often among the highest score found among dyslexics on IQ tests and a scan of some of the most accomplished writers of all time include dyslexic writers of all sorts.

It’s important to remember this, because literacy for dyslexic students in the early years should not consist only of single word and subword training. Time should be made for inspiring and filling up the imaginations of students, whether it’s with fantasy literature, beautiful thought-provoking poems, screenplays, graphic novels, or inspiring speeches or quotes. Dyslexic students should be read to, whether through teachers, parents, audiobooks, or e-books. It’s here that advanced vocabulary and ideas are learned and students can become word lovers.

For a very long time, a huge gap may exist between what dyslexics are able to read by eye and works they can read by ear or through the combination of visuals and words like graphic novels.

Even in the early grades, students may fall in love with words if they listen to great written works or speeches. In fact, an analysis of the structure of writing at this high level might inspire them to set their aims higher.

Read the winning entries of our Karina Eide Young Writers Awards. What do they admire in the writing or what might they have written differently.

Rewrites can also focus on word choice using one of the rephrasing tools on the previous page or something like Visual Thesaurus which used to be completely free, but now lets you put some words in. When you click on a word, another animated array of similar words floats up. 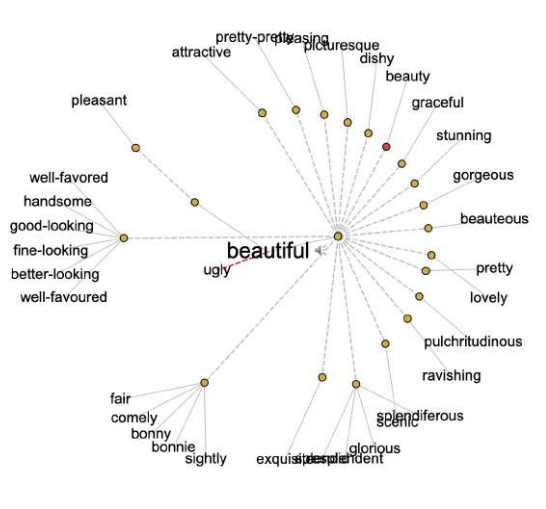 Other links and sites to be inspired by listening to great writers:

Falling in Love with Language from the Write Practice

I am also a huge fan of writing from imitation. It was good enough for the ancient Greeks and it’s good enough today.

A long time ago, I wrote about our kids classical writing class that had them doing progymnasmata or preliminary writing exercises. It started with the retelling of a fable.

My complaint about many writing assignments for dyslexic students, is that too much is expected at once and few if any models are provided that can help students figure out what they are to be aiming for. As a result, the target is always changing and students may stop writing at all because they don’t know what they’re supposed to write and they can be overwhelmed with the possibilities.

Here’s an example of assignments in a writing course that took place over 7 weeks.

Week 1: Choose an Aesop’s Fable and retell it in 150 words or less.
The nice thing about this assignment is that because it’s a retelling of a story, it has
more focus on the actual process of writing than analysis and summarizing new
information. Students who begin here are less likely to have a problem knowing
where to begin. Few students will write nothing.

Week 2: Retell the story in 50 words or less.
Here students get practice prioritizing and simplifying.

Week 3: Retell the story as a newspaper article. Less than 500 words.
More creativity can come in here. Attention to action words and the “voice”
of newspaper writing can take place.

Week 4: Tell the story from first person perspective. Less than 500 words.
Dyslexic students as a group may have strengths in theory of mind or seeing events from other people’s perspectives. This assignment exercises creativity in terms of reflecting on and imagining events from other people’s perspective. I also like the requirement to take less than 500 words. Rather than emphasizing a minimum, it’s a maximum that students can’t go beyond. In our son’s class, his partner imagined Little Red Robin Hood from the Grandma’s point-of-view being eaten!

Week 5: Retell the story with attention to the sound of words.
This is always a fun exercise. Who doesn’t love onomatopoeia? Definitely prime
the pump by including examples before students begin to write.

Here’s our son’s assignment. I think he was in the 7th grade. He chose to retell it as a poem.

In days of old, the inventor Daedalus
held the key
To King Minos’ most urgent plight.
The monstrous Minotaur, mighty man-bull,
Threatened all of Crete.

Finally a magnificent Labyrinth was made.
A tangle of twisting paths,
Bewildering blind alleys
At last restrained the beast.

Minos,
Cruel and corrupt,
Conceived a clever crime.
The inventor and his son were shackled
To keep the secret safe.

In a dank and grim prison tower
Daedalus and Icarus sat.
Dark, dismal, desperate.
Suddenly, a plan!
A flapping flurry of wings outside the window.
“I shall make some wings
So that we can escape this horrible place.”

Daedalus and Icarus began to scrounge
For feathers from birds
Wax from the candle drippings left
by the jailers.
Daedalus rubbed the wax roughly between
his fingers.
At last they were finished.

Drawing close to his son,
Daedalus sternly warned,
“Do not fly too high. The Sun will melt your
wings.”
They squeezed through the bars
of their cell.
They looked down at the green-blue ocean
With torrents of white foam crashing
on the rocks below.
They were whipped by wild winds.

The two jumped off the edge.
Time stopped.
It looked as if they would plummet
into the sea.
But they forced their wings together
and swept up to the heavens.

Then Icarus felt a terrible change.
A drop on his shoulder.
He turned his head.
The wings were beginning to melt.
Suddenly feathers were flying off
everywhere.

He silently screamed.
Daedalus saw his son plunge into the sea.

I remember at the time it amazed me that he wrote so much, but he got into the enjoyment of writing for writing’s sake. The course was ungraded. Our daughter chose a Norwegian myth (part of her heritage) and it was around then that she began writing as a recreation using fan fiction.

Too often bad writing assignments for dyslexics are those that demand both too much and too little. Too much in terms of different types of writing with each assignment and word count requirements that may physically be too much at their stage of development, but also too little in terms of thinking, analysis, and creative imagination.

6. Retell the story with humor.
This retelling can be easier or harder depending on the fable selected. Nevertheless, it can also uncover some great comedic talents in a classroom.
What makes writing funny? Some writers can really come alive with such a
prompt.

7. Free Choice.
Again, if you’re doing the assigning, you can prime the pump with different types of writing. Our son chose to retell the myth of Icarus as a courtroom drama. You can read it HERE.

Other forms of writing from imitation are lessons based on mentor texts.

This article by Kelly Gallagher takes a less structured approach to writing through imitation, but it’s also quite good. 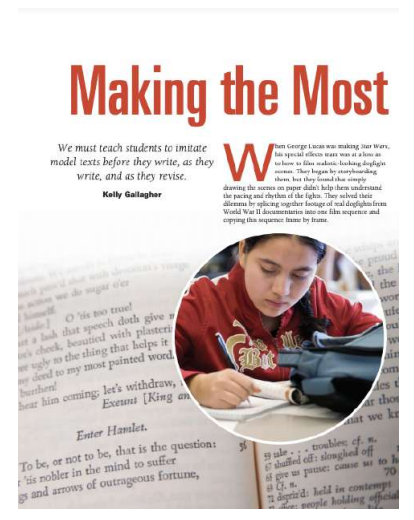 Want to know where to find mentor texts? Check out Amanda’s list of resources HERE.