Higher Math for Scientists: Don’t Give Up [Premium] 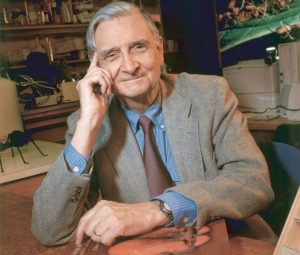 A photo of E. O. Wilson by Jim Harrison

“…To be a successful scientist, you need to do what you like to do. If you don’t like mathematics, don’t give up. That doesn’t forestall you’re being a scientist at all.”
— E.O. Wilson

One of the first science professors I had as a freshman at Harvard was E.O. Wilson, a pioneer of Evolutionary Biology, and scientific giant. I would only learn years later that he was also dyslexic, struggled with math, and was blind in one eye due to a childhood injury.

He passed away in December at the age of 92, and left a legacy of insights on the natural sciences and the education of young scientists.

One bit of advice that drew him into controversy was his strong insistence that “being good at math” wasn’t essential to becoming a great scientist.

I’m glad he said it, he said it because he lived it – and he knew it to be true – and he knew that a lot of talented scientists-to-be are discouraged from entering science because they fear their weakness in math will block their way.

“The world awaits you. And more so now than ever, never mind that science has as its primary language, mathematics. It has other languages as well. And it really has a requirement overall, for gifts often lacking in those who are enamored of mathematical analysis and laboratory work, namely, intuition, the ability to recognize patterns, and above all, a lifetime devotion to find detail of the wonders of the natural world. I like to say that if you want to do be an entomologist, or work on nematode worms, nematode worms are little miracles of themselves.

Do you want to go down to the level of bacteria? A rotting pine stump in the woods is a universe. You could spend a lifetime in a Magellanic voyage around that one pine stump, and just spew out one important scientific discovery after another… a large part of science of the 21st century is going to be synthesis. We are entering an age of synthesis of the analysis of complex systems and that’s going to require enormous amounts of detail and attention to detail and the way things fit together.”

From his essay in the Wall Street Journal:

“During my decades of teaching biology at Harvard, I watched sadly as bright undergraduates turned away from the possibility of a scientific career, fearing that, without strong math skills, they would fail. This mistaken assumption has deprived science of an immeasurable amount of sorely needed talent….

I speak as an authority on this subject because I myself am an extreme case. Having spent my precollege years in relatively poor Southern schools, I didn’t take algebra until my freshman year at the University of Alabama. I finally got around to calculus as a 32-year-old tenured professor at Harvard, where I sat uncomfortably in classes with undergraduate students only a bit more than half my age. A couple of them were students in a course on evolutionary biology I was teaching. I swallowed my pride and learned calculus…” I was never more than a C student while catching up, but I was reassured by the discovery that superior mathematical ability is similar to fluency in foreign languages.

Pioneers in science only rarely make discoveries by extracting ideas from pure mathematics. Most of the stereotypical photographs of scientists studying rows of equations on a blackboard are instructors explaining discoveries already made.

Real progress comes in the field writing notes, at the office amid a litter of doodled paper, in the hallway struggling to explain something to a friend, or eating lunch alone. Eureka moments require hard work. And focus.

Ideas in science emerge most readily when some part of the world is studied for its own sake. They follow from thorough, well-organized knowledge of all that is known or can be imagined of real entities and processes within that fragment of existence. When something new is encountered, the follow-up steps usually require mathematical and statistical methods to move the analysis forward. If that step proves too technically difficult for the person who made the discovery, a mathematician or statistician can be added as a collaborator…

If your level of mathematical competence is low, plan to raise it, but meanwhile, know that you can do outstanding scientific work with what you have. Think twice, though, about specializing in fields that require a close alternation of experiment and quantitative analysis. These include most of physics and chemistry, as well as a few specialties in molecular biology.

Newton invented calculus in order to give substance to his imagination. Darwin had little or no mathematical ability, but with the masses of information he had accumulated, he was able to conceive a process to which mathematics was later applied.”

Needless to say, there are mathematicians and scientists who opposed this advice (for example, HERE), but EO’s advice resonated with me both professionally and personally, as I also have dyscalculia. In a prior issue, I interviewed a statistician with dyscalculia (Dylan Lynn), and numerous other scientists and technology professionals who are dyslexic (for instance Jack Horner, Douglas Merrill) have talked about their challenges with pencil and paper math. Unusual discrepancies abound among dyslexic professionals.

The way may not be easy, but there is a great need for intelligent scientists and other STEM professionals, and it is a mistake to put obstacles in the ways of those who might be quite successful in their fields.