Comforts of the Abyss: New Book from Philip Schultz 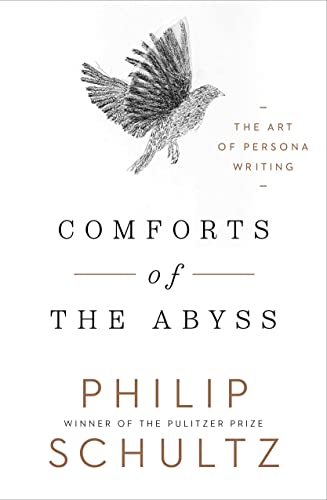 “Schultz, founder and director of The Writers Studio, chronicles the challenges he faced as a poet, fiction writer, and teacher that led him to see the aesthetic and psychological value of creating a writing persona. He has long confronted a pervasive inner critic that he calls “the s*bird,” whose “sole agenda is to negate and revoke…—the author discovered that a persona allowed him to distance himself from his material, such as his erratic, self\ destructive father, and his own feelings of shame and fear of failure.” – Kirkus Reviews

Philip Schultz has a new book out called Comforts of the Abyss: The Art of Persona Writing where he shares his battle with dark voices in his head and how he transcends it using borrowed voices and personalities to give him an imaginative distance to see the world and tell the stories from many perspectives. It is not a book for children (strong language, suicide, adult themes), but it is a poignant and humanly important book about the quest of self, suffering, and finding a positive voice.

This book is not explicitly about dyslexia like his other book, My Dyslexia, but it is about dyslexia because Phil’s dyslexia was so severe, it impacted so much of his life experience and education.

A beautiful review of Phil’s book can be read here. Phil’s book is not a how-to book of persona writing, but rather a personal account of how he became awakened to great writers and characters and found a voice of his own after suffering years with severe dyslexia and fundamental questions about himself and who he wanted to become.

It’s a side of dyslexic experience that receives all too little attention. To see dyslexia as simply a “problem with phonological processing” completely misses the point of how profoundly it can affect children growing up, and how important it is to consider when children are looking for a positive view of themselves in the future.

Considering how difficult books were for Phil to read, I found it fascinating how important books were to finding a positive view of himself. An example from Comforts of the Abyss:

“I’d go around pretending I was Jake Barnes in The Sun Also Rises and Holden Caulfield in The Catcher in the Rye, and even the old Huck Finn in Adventures of Huckleberry Finn. Their opinions and attitudes became mine and I would even try to talk and act the way I imagined they did. Which wasn’t an easy feat for a dyslexic. I didn’t know that I was dyslexic until much later, or that it was the reason I didn’t learn to read until I was eleven, was held back twice, and grew up thinking I was dumb, but this way of reading and seeing the often confusing world around me allowed me to see myself as a character in stories I wanted to not only read but write…”

“As a child I often felt as if I were living someone else’s life, a kind of apprenticeship to someone I was supposed to be or become, that I was in fact only borrowing my personality, living in servitude to a force or authority greater than myself…I began to wonder what would happen if, instead of denying the embrace of this negative force, our very hunger for servitude, one used it as a source of inspirations and creativity. Failure, which played so large a role in my father’s life and in my own undiagnosed dyslexic flounderings, eventually became a source of creative strategy and intuition, a subject to draw and paint, and later to write poems and stories about; a means of turning my “self-splintering” into a method of survival and comfort.”

And: ” Oscar Wilde certainly was onto something when he said, ‘Man is least himself when he talks in his own person. Give him a mas, and he will tell you the truth.’ We all design masks behind which we hide our imperfections, the parts of us we deem unworthy of public display For many writing is a means of creating an aura of strength and invulnerability, of persuading others that we’re worthy of their respect.”

Here’s our conversation with Phil:

As Phil explains in Comforts of the Abyss, his Writers Studio, was inspired by his friend Ralph Dickey who had the idea that “it’s not only possible to turn one’s fear and negativity into inspiration, it’s the essential process behind the making of art.

In the aftermath, Phil found that persona writing became a lifeline to him, and a way that he could begin the hard work of positively reassessing and reinterpreting his life.

To honor Ralph today, Phil and his wife Monica have created the Ralph Dickey Scholarship for Black aspiring writers.