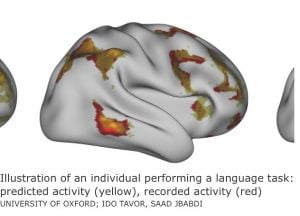 “This suggests that individual differences in many cognitive tasks are a stable trait marker.”

There’s a new Oxford research study circulating through scientific communities and around the world. From Science (Task-free MRI predicts individual differences in brain activity during task performance), Tavor and collegues applied machine-learning principles to test subjects in a “resting state” to see how they could predict their performances on various cognitive tasks.

What was the result?

They could predict subject’s responses in 46 out of 47 tasks (and maybe there’s a reason why the 47th one didn’t work…it involved more subcortical activity). Tasks included responses to mental math, sentence and story processing, but also higher order problem solving, social perception, and working memory.

The data have a lot of ramifications in terms of understanding how connectivity (and the research methods that document differences) has real-world associations with cognitive performance. Also, it may provide future groundwork for the holy grail of education: personalized learning.

What about dyslexia?  Neuroscience is making progress there too. Another research group from Europe use a  machine-learning algorithm on brain scans to predict whether college students were dyslexic or not. A trained anatomical classifier identified 80% of students with dyslexia correctly and 78% of non-dyslexic correctly. Not bad – especially considering that here in the US, some 3 out of 4 students are being missed by public schools.

Ok – why is this new dyslexia research paper interesting?  It’s interesting because it had a machine learning program figure out the differences in brain activation patterns among known dyslexic and non-dyslexic college students. That means that preconceived notions by the researchers weren’t important in distinguishing the differences between the two groups.

Here’s the main graphic finding of the paper:

“While in the present study dyslexics exhibited less GM (gray matter) volume in the LIPL, they exhibited more GM volume in the LOFG and ROFG. And although GM volume in both areas correlated (negatively) with severity of dyslexia, only the LOFG correlated with behavioural measures: negatively with whole-word reading and negatively with spelling (in contrast to the positive correlation found between the area in the LIPL and spelling). These negative correlations are remarkable: better performances on whole-word reading and spelling are accompanied by reduced GM volume.”

The researchers don’t know what to make of the great gray matter in the fusiform gyri. They speculate that they may be seeing training changes, but fusiform cortex is also known for diverse visual functions, including processing of color and various aspects of visual perception, conception, and mental imagery…all activities interestingly enough –  that can be found in popular curricula to teach dyslexic students.

Do NOT follow this link or you will be banned from the site!