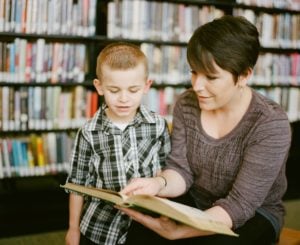 Families can really make a difference.

Many times, they are the last place to find encouragement or to help find a connection to the next opportunity in life.

Marc shared with me that he grew up in a family that was poor with both parents working full-time to make ends meet. He had been an unexpected baby and an additional financial burden to the family. When he grew up, he recalled being a “clumsy kid” who wasn’t successful in sports like his older brother. His brother and his father connected through sports, but Marc had a harder time seeing ahead to his future because he wasn’t good in sports in addition to his problems in school.

Fortunately, though there was an uncle to Marc who seemed to take a special interest. Marc would learn later that this uncle had helped convince his parents to “keep the baby,” telling them that the child would bring “a lot of joy” to them.

This uncle was also a doctor and he would eventually become a lifelong mentor to Marc. When Marc became interested in nature, he would buy him books like Raymond Lee Ditmar’s Reptiles of the World, that led him to love learning more about the natural world. He would also give him toys that he had bought for his children after they had gotten tired of them, and Marc inherited an old version of The Book of Knowledge, when his children got a new set.

Marc continued to have highs and lows in his life’s education – struggling to pass high school (failing foreign languages, struggling with multiple choice tests, and only successfully completing Geometry), but found a sport that he was good at (wrestling) and being admitted to college based on his success in that sport. His father had actually signed him to be a welder (a well-paying trade by that time, as Marc was recognizing that he was skillful with handcrafts like sculpting), but recognizing that he loved learning about the world, a college education seemed like a better match than going to welding school.

Marc would go on to have more twists and turns in his education – even almost failing out of medical school until he learned how to make cartoons to remember information- but he became a pioneer in the new specialty of pediatric surgery.

Here’s a presentation Marc gave at one of our Dyslexia and Innovation conferences.

Here’s an inspiring example of a mom. I know I can’t do justice to all the amazing moms in this section, but here goes! Moms are often mentioned in interviews of accomplished people – they help with homework, they read to their kids, and they help them grow up confident, aware of their strengths, and encourage them to advocate for themselves at school as well as at work.

Douglas Merrill (Google’s first Chief Information Officer) told us about how his mother tutored him every summer because he would forget how to do basic operations. David Hornik (tech venture capitalist) remembered how his mother marched into school telling his teacher that she wouldn’t let him be held back a year to “catch up”. Shark Tank Daymond John’s mother taught him how to sew, took out a mortgage on her house, and let her son turn their house into a factory in order to the launch the FUBU clothing line (it eventually was valued over 350 million dollars).

Mary Clifford is another great mom who is also dyslexic. She was a history teacher herself and her son grew up to be a history professor despite his severe dyslexia.

As a kid, Jim Clifford poured over National Geographic magazines and he and his mother would split off from his father and brothers when on vacation to spend hours studying artifacts in museums and or walking through historical places. When Jim was 7 years old, the family travelled to Saskatchewan and looked at where her grandparents had lived and died. She remembered how touched Jim was when he walked through the graveyard and they noticed how some children had died from one family one winter.

At school, dyslexia was not recognized or remediated and Jim was coached by Mary how to ask for what he needed in school. She advised that Jim always try to present his teacher with a choice when he couldn’t possibly finish something.

Would she prefer that he answer every other question in full sentences or answer every question in bullet point form? It usually worked and Jim realized that without accommodations he couldn’t possibly fulfill his dreams of eventually going to college. He would do that and also go on to get a PhD and become a professor in history specializing in ecological consequences or urbanization.

For all that Mary did for Jim, she also credits her husband for helping. Besides Jim, Mary also had another son who was also dyslexic, and another one with ADHD. She said she definitely “married” well because her husband was content doing the proofreading for all of them!

When it comes to dad stories, again there are many to pick from. The father of William Butler Yeats inspired his son to love poems and beautifully turned phrases by heroic readings in beautiful natural surroundings. W.B. struggled mightily at school, but after a brief stint trying to become a painter, he found his niche writing poems and ultimately became one of the greatest poets of the 20th century. He won the Nobel Prize in Literature, too.

UC Berkeley Professor and scientist Mimi Koehl credits her father with helping her “get” math. When school instruction, drill and memorization caused her to struggle, her father, a Physics professor began tutoring her and taught her his “tricks”. Math became more intuitive and no longer became a hurdle in her pursuit of a scientific career. He also let her build things with him in his workshop – and today her science incorporates building things like robotic birds to see the impact of physical forces in complex natural environments.

Dr. Joy Balls-Berry told me it was her father who found a summer opportunity doing medical chart research that helped her decide to choose a career in medical epidemiology.

Sir Jony Ive, Apple’s premier designer (iMac, iPhone, IPod, Air, Apple Watch, Apple Park), credits his craftsman father with influencing his aesthetic and high standard of quality. In his words, he said it was important to finish the back of a drawer not because anyone will see it or appreciate it, but because you think “it’s right.”

All of these family members had the knack for seeing potential and helping any way they could. In the K-12 years of school, help took the form of practical advocacy and outside of class tutoring, but it also took the form of outside experiences, chances to develop little areas of knowledge and skill expertise that might become important later on in prospective careers.

Progress was often non-linear and when advances were seen, they were due to personal relationships and experiences – all things that we should look for to help young people grow and begin to have more positive visions of themselves in the future.

When our son was young, we remember having trouble finding a good fit for him in schools. It helped that he had things that he loved learning about outside of school. When we found out that a gargoyle sculptor (some of his works on Notre Dame) lived in our same town, we paid a visit to his studio and that visit is still vividly remembered by him to this day, almost 20 years later.

There can be “so much to do” in school if a student is struggling with reading, writing, and math, but it’s also important to look beyond the classroom or homework walls because most of life is outside of school, and you can’t really know what people are really capable of once their brains and bodies mature, and most of all after they find their passions.

I know many in this community are drawn to it because of family members or other personal connections. If there’s one take away from this article, maybe it’s that little things – gifting a book, reaching out to a contact, or sharing some extracurricular or summer program might help more than you know. It’s like sowing a seed on fertile ground.

The poet Philip Schultz has talked about how important having different personas was to him when he was growing up and for many dyslexic people it is a strength and a way to imagine different futures for themselves.

What about you? Is there something you can do?