Visualizing for a Living [Premium] 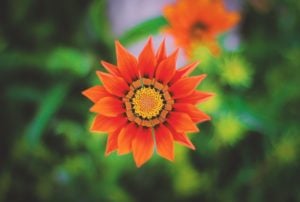 “My mind is very visual: I can see anything in pictures, and I always visualize things. I can’t help it. It’s how I’m wired. So whatever you talk about, I’ll see pictures in my head. Very vivid, colorful, lifelike pictures. They aren’t still pictures. I can make them move. Reality, fiction, whatever. I really have to pull it back in to get focused. It was also a problem in the classroom because I’d sit there and imagine where I’d want to be, and what I’d want to do, and what I wanted to become, and I’d think happy thoughts, and I’d just be tuned out the whole time in class.”

When Brock and I were on a radio show years ago, I remember the host confessing to us before we went on that she had always gotten in trouble for talking in class. Once she had a teacher say she’d never get anywhere with all the talking she did in class – but then she essentially ended up making a living by talking to all sorts of people. I remember thinking that maybe what kids are telling us when they’re “off-topic” or distracted – is what they should be doing or developing – their strengths are front and center, but we may be drawing the wrong conclusions because we want them to do something different.

I love this quote of Glenn Bailey’s because he certainly seemed like a first-class daydreamer – and he put that daydreaming to work as a serial entrepreneur and real estate developer.

Visualization has a curious intersection with dyslexia. It’s on no official definition lists for dyslexia, but it’s mentioned quite a bit in certain teaching strategies (Lindamood Bell’s Visualizing and Verbalizing comes to mind) and visualization seems to come up a lot in interviews of dyslexic children and adults, tutors, and even some neuroscience papers.

“Mental imagery can be advantageous, unnecessary, and even clinically disruptive… research has shown that visual imagery involves a network of brain areas from the frontal cortex to sensory areas, overlapping with the default mode network, and can function much like a weak version of afferent perception. Imagery vividness and strength range from completely absent (aphantasia) to photo-like (hyperphantasia). The use of imagery as a tool has been linked to many compound cognitive processes…”

I’m old enough to remember when neuroscientists debated whether imagery could even exist – we know not only that it exists, but that it may be very active in certain groups of people and there is good evidence that it is especially strong in dyslexic people in general.

When we surveyed this community about visualization, look at the different patterns that were seen when dyslexic people were compared to their non-dyslexic peers: 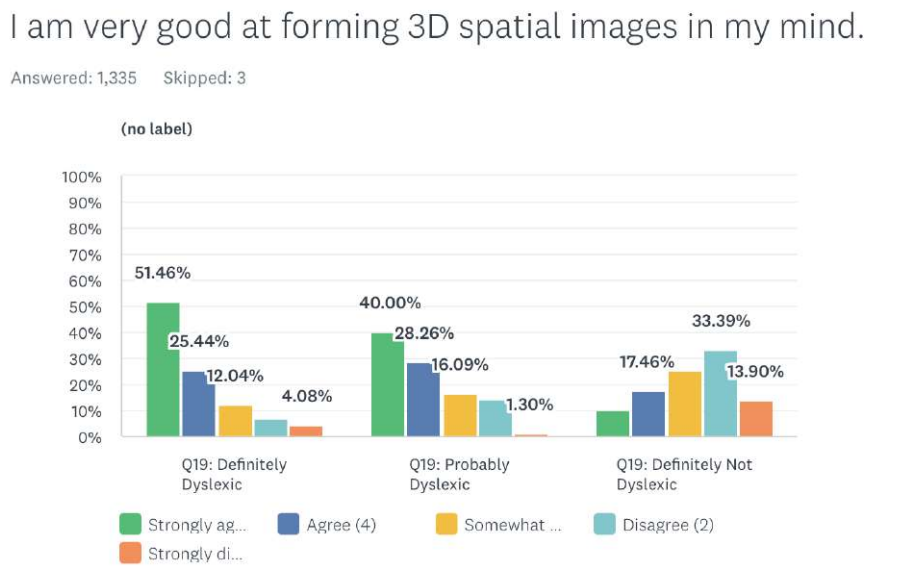 Over 75% of the definitely dyslexic people in this survey (they had testing that identified their dyslexia) agreed with the statement, “I am very good at forming 3d spatial images in my mind.” Contrast this to 27% of definitely not dyslexic respondents who agreed. This 3:1 ratio definitely supports a dyslexic strength in 3d spatial visualization.

Of course, this is only one aspect of visualization. Spatial visualization is used by makers of all types because it allows them to run motion pictures of what they would like to make in their heads. This skill is certainly valuable for all types of artists, designers, engineers, and inventors, but also those who remake spaces (like architects, real estate developers, landscape and interior designers), or those who fix things for a living – like surgeons, interventional radiologists, or mechanics, and computer network problem solvers.

What we know from the science of visualization is that visualization is strongly based on physical experiences – and that it is not a fixed entity, but something that can be quite fluid – and varying depending on what one is trying to image.

Though some spatial differences appear inherited, rich sensory-motor experiences likely have a direct impact on the formation of rich imagery.

Spatial experts of this type may be able to visualize a machine with many moving parts, take various pieces apart, then put them back together again with different variations and changes all in their minds. People who can do this often have had many years of taking things apart and putting them back together again. It’s important to reinforce the idea that physical experiences inform imagery such as this. In fact, some university-based projects focused on improving the retention of engineering students are finding that having students with lower spatial skills undergo spatial training (for instances CAD drawing, mental rotation, origami) not only improves performances on these tests, but also grades and retention in STEM majors and degree programs.

There are many strange aspects of brain organization, but one of them is that our brains organize spatial objects in a different area from spatial scenes. What that means is that it’s possible for people to be really good at one aspect of spatial cognition, but not so good or even bad at the other.

Students who are dyspraxic, they may have fine motor difficulties or other issues impacting their building ability so that they may be weak or average hands-on learners. They may still have rich visualization lives though, visualizing movies or stories in their head or the way that things could be. Strengths in this area may manifest themselves in animators, writers, filmmakers, world builders in many different disciplines, and entrepreneurs.

Story and future makers can have strong I, N, and D strengths (interconnected reasoning, narrative reasoning, dynamic reasoning), and training for that may take many forms, whether it’s storytelling through print, film, animation, music, or other arts, or the creation of projects, programs, or new businesses.

As an interesting example of where visualization for living can take you, I’ll close with at story of Eric Berlow, CEO of Vibrant Data labs. We had talked to him years ago about his dyslexia.

He uses data visualization to find out patterns in complex systems and had his start as an ecologist who first got started studying marine ecology, then moved to alpine ecosystems where he helped to build the first University of California research center in Yosemite. Working with a team of collaborators from the park services, the US Geological Survey, and Microsoft, he helped coordinate satellite, climate, and field data to support conservation.

Since then, Eric’s interests have spread to other ecological issues like food webs, exploring topics such as patterns in the evolution of creativity research, privacy issues in social networks, collaboration networks, and how to address teacher shortages in STEM.

In the video below, Eric talks to a group of TED fellows about how the visual mapping of collaborations provided insights about the patterns of collaboration that people develop.

The ability to visualize is a strength that seems to be more common among dyslexic people and not everyone seems to have it. Though visualization is rarely emphasized in the standard curriculum, some STEM courses are beginning to recognize the importance of building and hands-on learning.

Look for these talents and skills – in careers or projects that you might be considering. Because visualization skills are rarely taught in formal education, it could be a strength.