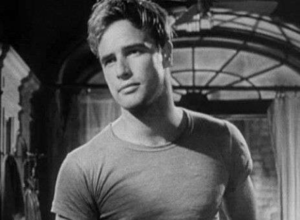 There’s a new book out this year on method acting, and it mentions Marlon Brando, his mercurial temperament, his dyslexia, and his method acting.

Apparently he had ambivalent feelings about taking one of the leading roles in A Streetcar Named Desire, and he was told to show up at the playwright’s (Tennessee Williams’) house in order to clinch the deal.

After hitchhiking to Provincetown, he found Williams and his friends in the dark, occasionally getting up to go to the bathroom in the woods. Apparently, a fuse had blown and a toilet was broken and neither Williams nor any of his artist friends knew how to fix either. Brando immediately made an impression, fixing both, then reading for the lead character, Stanley Kowalski.

Needless to say, Marlon won the part, and the rest is history (IMDB says Marlon is “widely considered the greatest actor of all times.” He won 2 Academy Awards, 5 Academy award nominations).

There is tremendous believability and raw emotion in Marlon Brando’s acting and today, although much controversy over whether method acting results in too much “bad behavior” on a set, I still found myself interested in how dyslexic traits like emotional sensitivity could have contributed to his excellence in acting.

Many people noted that it was Marlon who really ushered in the practice of method acting in film and theater. Before this time, there was a mannered practice of acting where it seemed more apparent that actors and actresses were playing a character rather than actually becoming a different person.

“The more sensitive you are, the more certain you are to be brutalized, develop scabs, never evolve…”
— Marlon Brando

In real life, Marlon grew up in a dysfunctional family marred by alcoholism and physical abuse – both of himself as a child and also his mother. Acting became a way out for Marlon as a child (uncovered by a documentary filmmaker Stevan Riley) after he was given access to Marlon’s estate.

Riley discovered tapes Marlon made for himself to put away the demons of the past. As he pieced together the outlet that Brando had in acting, he also realized there was a tension in these efforts.

Growing up constantly fearful of his father, he developed a knack for imitating people’s voices and mannerisms. Some of his audio recordings were collected with the idea that some day he would have a documentary made of himself that was the real Marlon. In one recording, Marlon reflected:

“When what you are as a child is unwanted, you look for an identity that will be acceptable.”

Part of the creative challenge of Marlon’s method acting was to walk in other people’s shoes. In preparation for a role as a vet, Marlon restricted himself to a bed for a month and moved around in a wheelchair. For A Streetcar Named Desire, he covered himself with sweat and grease, and for theater products of Truckline, he ran up and down stairs, then had a stagehand dump an icebucket on his head in order to get into the character who emerged from falling into a lake.

In Isaac Butler’s Method acting book, I found it interesting that the author details from the actor’s history that shared Marlon’s difficulty remembering lines (perhaps exacerbated by his dyslexia?) and complaints some of his co-stars noted with the wide variations in the timing of his performances from night to night.

“I could’ve been a contender…” scene from On the Waterfront.

“Brando refused to abide by one of the basic demands of professionalism in theater: that you must freeze your performance so that it remains close to identical night after night.”

Part of what made going to a live Marlon Brando performance may have been that you’d never know exactly what you would see on a given night – but that can be much more difficult for cast members who plan to act or say their lines on a particular cue. The lack of repeatability might have been part of that dyslexia-related challenge, but also interpreted by others as being deliberate and even inconsiderate. It also may have been that every night he was experiencing and living his role – and not just reciting memorized lines.

When fellow actor Karl Malden reminisced about this time working with Marlon, he wrote: “I believe Marlon consistently brought out the best in me…Marlon was living on stage…a performance miracle was in the making.”