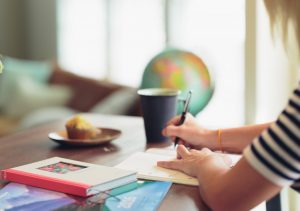 In research that was just published last month, investigators at the University of Washington were surprised to find when investigating pathways involved with writing – that brain connections of dyslexic subjects were more extensive and more far ranging than the connection patterns of their non-dyslexic controls.

To my reading, the finding is concordant with the findings of Dr. Manuel Casanova that we discussed in Dyslexic Advantage, and also consistent with a view of dyslexia as more difference than simple deficit. Although many lay people conceive of dyslexia as a deficiency or impairment, the neuroscience reveals connectivity differences that are greater in some areas and less in others. Abundance of connections in some pathways among dyslexics may account for the strengths in divergent thinking (I-strengths) and fluid reasoning seen in so many children and adults. Some of the differences between controls and adults were quite large; in the figure at left (if you click, it will pop up) see how one measure of ‘greatest connectivity’ in one brain region (inferior parietal lobule) is 203 pixels in controls compared to 792 in dyslexics. 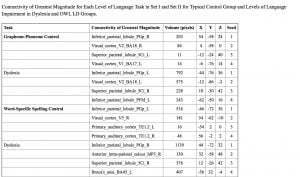 No wonder it’s hard to write!

With this unexpected result, no doubt there will need to be additional studies to confirm, comprehend, and extend these findings, but it’s safe to say that the work of writing in dyslexia is significant. When we observed dyslexic students struggling to write, it’s so often the case that we could see that the difficulty was not because students didn’t have anything to say; more often it was the opposite – too much to say and a difficulty translating or selecting the words that would match their knowledge.

This research finding could be why, for instance, template-based writing curricula seem to help so well with older dyslexic students; templates (for instance, prompts for who, what, where, why, how) narrow down the possibility for students, in a question-and-answer fashion, allowing the writing process to move forward. The overconnectivity issue may explain why word substitutions occur and why dyslexic writing challenges are different from a broader language impairment which also affects oral language (SLI students in this study had fewer connections).
Read more HERE.