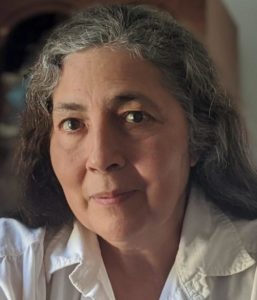 Paula Beardell-Krieg is an innovative math educator and paper artist who brings all types of math wonder and discovery in her work as a math educator.

As an example, check out her flexagon below.

I recently had the chance to talk with her about her experiences raising two children with dyslexia, dysgraphia, and math difficulties. They are now all grown and they are generous about sharing their experiences with math.

The first thing that Paula mentioned when I asked her math, was the fatigue her children experienced with completing assigned math work.

She showed me an example of one of her children’s papers which required two columns of fill-in-the blank answers for estimating math numbers. Her daughter had dutifully completed all the questions in the left column of the work sheet, but by the time she got to the second column, the errors dramatically increased. 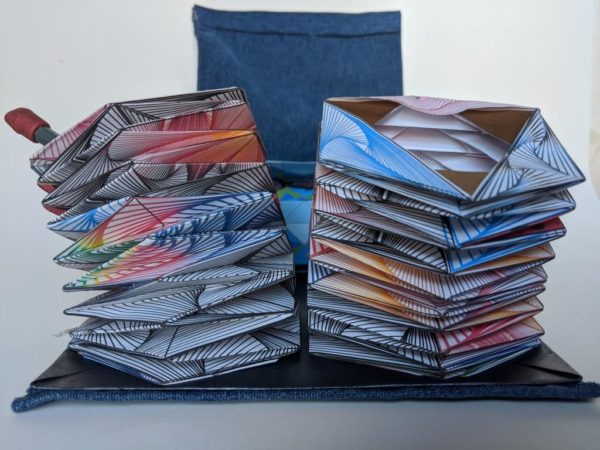 The sheer quantity of math homework assigned is often wildly out of touch with reality of dysgraphia, impaired automaticity, and working memory overload seen with dyslexia. After the point of fatigue, there is no purpose for more math work. Errors will accumulate, and worse, students may become confused about math concepts and procedures that they have already mastered.

In an example from higher math, Paula said she recalled reviewing with her son the different ways that polynomials like a quadratic equation could be factored. But because of fatigue, her son preferred just fitting in the numbers into the quadratic equation which he could write from memory because he had learned it in a song…and Paula recognized it because she realized it was real and deep fatigue. 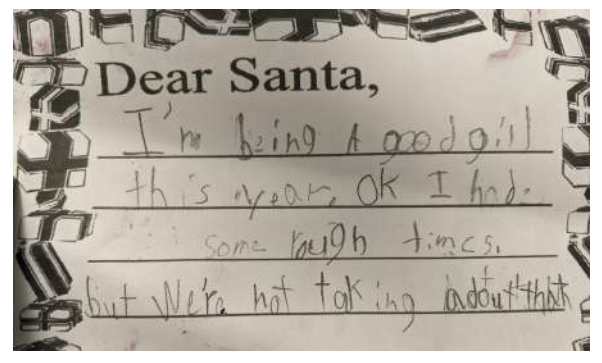 Paula shared this Santa writing from her daughter. It reads: “I’m being a good girl this year. Ok I had some rough times, but I’m not talking about that.”

Another difference Paula discovered among teachers was their use of “points off” or negative reinforcement to change student behavior. When she talked about this with her son, he recalled a teacher in the 6th grade who, although in most regards was a wonderful teacher, had little information about dyslexia, and would take points off for all sort of mistakes or omissions like forgetting to put your name at the top of an assignment.

The teacher would tell the class that she would take 10 points off if they forgot to write their name at the top, and when passing papers back, mention that he had forgotten to write his name (but not take the points off), but regardless, the end result was that he felt terrible.

When Paula asked him whether the “points off” approach made it more likely that he’d remember in the future, he said “No, it just made me feel worse.”

Later another teacher told Paula that she used to take points off or warn about taking points off for various mistakes, but then she stopped doing it because it didn’t result in any change. Instead, she switched to positive reinforcement providing rewards or something else positive to increase the likelihood that students would remember.

Premium subscribers can listen to my entire talk with Paula in our Premium Podcasts HERE in the Math recordings group.

Toward the end of our talk, Paula talked more about general strategies she tried to develop in her children as they worked their way through public, then private school. First, she made sure her children could tell their teacher how they needed to hear information. For instance, she remembered when she once tried to explain something to her son and he didn’t understand it. She tried conveying the information another way – but he stopped her saying – no don’t explain it another way, just repeat what you said before.

Sometimes it would take repeating several more times, but he would get more of it each time until he finally understand the process or principle. He would try to do the same in school, but sometimes a teacher wouldn’t want to explain information again.

Paula also shared that she observed that there were predictable times when her children seemed to have trouble in making the transition to Algebra. Up until that time math consists of operations involving specific numbers, but things change to more generalized number relationships with equations and polynomials, and variables that are expression in relationship to other variables.

Without explicitly teaching this big picture difference in the branch of mathematics, students can get confused with the use of different letters to represent numbers and all of the math work that follows.