COMICS AND DYSLEXIA: A Curious Connection… 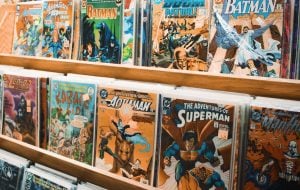 “The first book I ever read was a comic book…”

“Comics were my lifeline…”

“The way I got through college, was comics…”

What is it about comics? So many kids and adults over the years have told us how important comics are to their reading. In fact, they have so much of importance to say, that we’ll let them explain…

IT TRAINS YOUR BRAIN

“This is something that comics can do better than any other medium. Ignore the words for just a moment and look at the images. In fact, imagine there were no words. Would you still understand the story? Absolutely, you would…Look at both the pictures and the panel construction. There is movement. There is narrative progression…It would be difficult to create that sense of movement, that primal understanding of narrative, with prose. A film could tell the same story, but then the screen would be doing all the work. What happens here is that it’s you doing the work. Your brain picks up on the visual cues left by Ditko, and fills in the gaps. This is why I use it as an example for what dyslexics can gain from reading comics.

A comic book trains your brain. It works the right muscles and, if you’re struggling, it can teach you to read. You see images for context, you see the words that go with them, and your mind learns to fill in the blanks. You learn to build the narrative as you go. As a child, I suddenly got it. I had a structure, a guide for processing the information I was taking in, and where to store it. I had a reason to keep moving through the pages.” 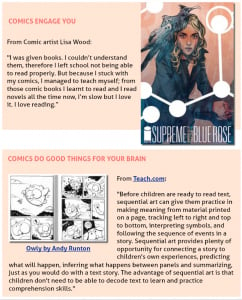 “Because graphic novels require readers to actively decode and comprehend both text and images and the interplay between them, students must use higher-level thinking skills such as inference and synthesis. The narrative structures that authors can create using both text and image are often different from and sometimes more complex than text alone, and while reading graphic texts, students must analyze and synthesize structures both within a page and often as a pattern throughout the book. The graphic medium also provides for novel uses of metaphor, symbolism, puns, irony and point of view… 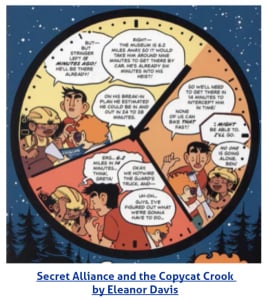 In this single panel from The Secret Science Alliance and the Copycat Crook External link , Eleanor Davis challenges the reader to keep up with the characters as they try to figure out the timing of their next move. Neither of these complicated narrative structures would be possible with text alone.”

Research (Hayes and Ahrens) shows that comic book average 53.5 rare words per thousand compared to 30.9 for children’s books, 52.7 for grown-up books, and 17.3 for college graduates talking with friends!

THE TEXT IN COMICS IS BETTER SUITED TO DYSLEXICS

In general, the use of expressive san serif fonts, capitals, and thought bubbles, and short bits of text makes the visual aspects of reading in comics easier for many dyslexic children and adults. 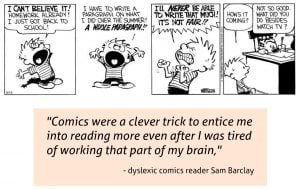 Recently, I discovered a beautiful graphic novel by Tory Woolcott, an artist and writer based in Toronto. She recently graduated with an honors degree in Archeology and Near Eastern studies and is working on her next book.

Comics and graphic novels are a powerful means of communication and expression for this incredible community of storytellers. 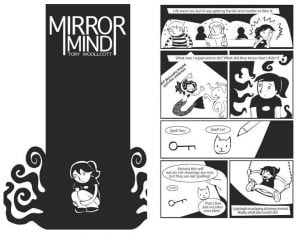