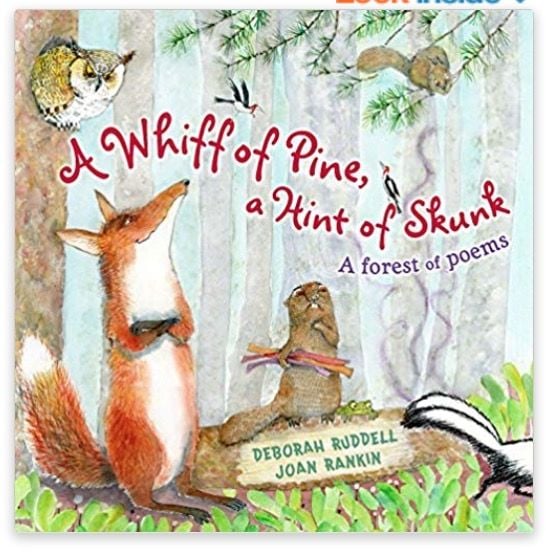 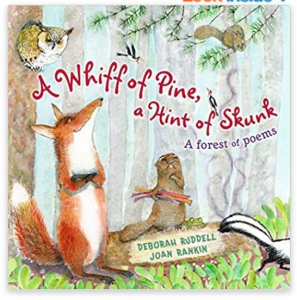 When she asked them to suggest a favorite poet, the response was not unexpected “Poetry is dumb”, “Girls like poetry”, etc.

When she asked about a favorite musician, she got a rousing response – but then she countered with, “I hate to break it to you, but you all like poetry…lyrics are just poems set to music.”

Drawing on some cutting edge academic research (see Turn Your Boys to Readers on page 14), Benita predicted that boys would enjoy poems that were “silly, bizarre, gross, or absurd”.

She chose her start with the poem, A Wild Turkey Comments on His Portrait.

“Rather than passing out copies of the poem and having the boys individually muddle through the text, I stood in front of them. Clearing my throat … I began to perform the turkey’s diatribe as he disputes the likeness of a child’s hand to his “distinguished” (p. 14) visage. In the beginning the boys stared dumb struck at my enthusiastic recitation. I did not remain still, I moved with the words, with the indignation and humiliation of it all. Peaking up from the poem, however, I could see that all five boys were beginning to smile, hands over their mouths, but beginning to smile. By the time 1 had reached the conclusion of my rant, they were leaning forward in the desks giggling… 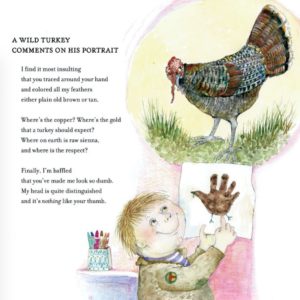 “For the next four days I selected the poems we would read. With each poem I performed the initial reading, modeling what good fluency looks and sounds like…I explained the basic concept of oral fluency to the boys by explaining that when we read aloud we want it to sound like normal speech. ‘We….. Do…. Not….. Want…. To…. Sound…. Like … A…. Robot.’ Or ‘speakasifwearetryingtobethefirstonedone…’

After modeling, the boys would participate in various repeated reading activities designed to improve their confidence in their reading ability. We chorally read poems, sang poems, read them with overly exaggerated expressions, like they were the saddest story in the world. At one point, while a local children’s opera was performing at the school, the boys all wanted to turn the poems into operas. By the end of the first week, the boys were asking when it was going to be their turn to pick the poem….

At the conclusion of each poetry activity, the boys spent time recording their comments about the day’s activity on our group’s Kidblog. I established our Kidblog as a means for the students to share their feelings about the poems in a non-threatening and safe environment. It is important that students experience the writing process in such a way as to encourage their individual growth a writers without crushing the enjoyment of writing. Reading and writing are integrally connected. In order to be accomplished as a reader, one must also experience writing.

Initially the students’ writing on Kidblog was rudimentary, with many spelling and grammatical errors commonly seen in students exhibiting dyslexic characteristics:

(A Wild Turkey Comments on His Portrait)

“it was funny when ti said dum. the hole poem was funny. ti was fun.
ti was fun and funny because all of the funny comments. waild
turkys are smart.”

As our lessons continued the boys’ writing began to develop more sophisticated characteristics:

“I thought the poem was great because it had beats like bump bump
… you know what I mean but it was going fast and the beat went
with it and it is very weird how there are 2 stanzas per sentences
I think it is weird you might not.”

The more time we spent with poetry, the more curious I became regarding the boys desire to attempt to create their own poetry and proposed individually writing the about four weeks into the project. With the exception of one of the students, they were all interested in giving it a try. I would not say that they were excited about the prospect, but I found the fact that they were willing to take the risk very encouraging. The boys all wanted me to write one first so that they could see what to do. Despite the fact that I am not a poet, I modeled composing a poem for the boys on our blog. The fact that I choose the boys as the

subject of my poem really excited them. It was important that the boys saw me creating poetry and taking a risk right along with them.

I did not force the one boy who did not want to write a poem to participate in activity; he expressed to me that he had no good ideas and did not know how to rhyme. We discussed that not all poems have to rhyme and casually worked on brainstorming ideas from his daily life and interests that he could use as a starting point. My time working with this student was cut short as he was often pulled for math intervention during our small group. I was pleasantly surprised that towards the end of my time with the students he posted a surprise poem on our Kidblog. He actually wrote his own poem because he was motivated from within not because I was forcing him to do it; he knew he could do it and was personally motivated! 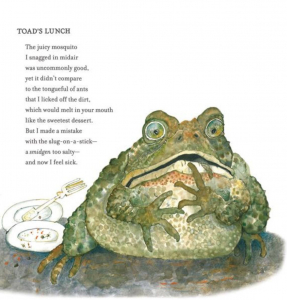 Toad’s Lunch also from A Whiff of Pine, a Hint of Skunk

As a cumulating activity of our time together, the boys began working on a partner reading of the poem The Grump (Rasinski, Harrison, & Fawcett 2012). Over a period of two weeks, we “work shopped” the reading of the Grump. The boys practiced reading the different parts of the poems with varying inflections and emotions. I encouraged them to develop their own characters. The boys read for each other making comments on ways to improve their group-mates performance. I was very impressed with the ability of all of the boys to find constructive comments, both positive and ways to improve. The boys were unsure about performing their individual renditions of the poem for the entire class, but were very keen on creating an audio recording. In hindsight, I wish I had made recordings of the boys’ readings throughout the entire process. As evidenced by daily observations and classroom assessments, each boy made substantial gains with their fluency, automaticity and prosody.”

Bravo to Ruddell and Rankin for a great book, and Benita for her wonderful example in teaching!