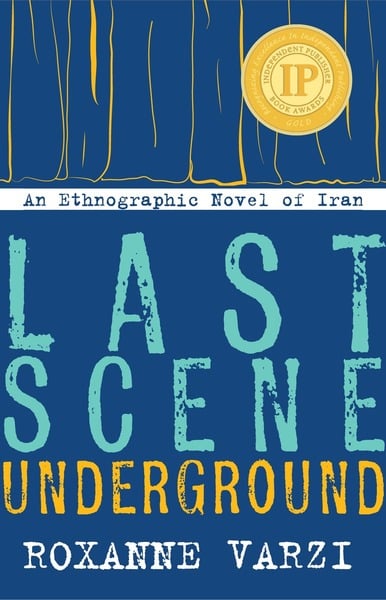 I recently had the chance to talk to Dr Roxanne Varzi, a writer, anthropologist, and filmmaker who was also the first Fulbright Awardee since the Islamic Revolution for research in Iran.

She’s doing such interesting work that is creative on many levels that I wanted to share some of what she does with you.

She is also gifting us with her audiobook, Last Scene Underground: A Ethnographic Novel of Iran, that we’ll be doing a random draw as a giveaway later this week.

From the description of the book:

“Leili could not have imagined that arriving late to Islamic morals class would change the course of her life. But her arrival catches the eye of a young man, and a chance meeting soon draws Leili into a new circle of friends and artists. Gathering in the cafes of Tehran, these young college students come together to create an underground play that will wake up their generation. They play with fire, literally and figuratively, igniting a drama both personal and political to perform their play – just once….”

Roxanne is not a traditional academic. Usually professors work their way toward tenure with research papers in academic journals, but after writing a book on young people coming of age in the Islamic Republic, she made an experimental film on mourning and martyrdom, then a sound art project called Whole World Blind, an audionovel, The Last Scene Underground, and additional video documentaries.

Like many adult dyslexics, Roxanne discovered her own dyslexia through her son.

As a child, Roxanne and her family fled Iran when she was 8 and classroom challenges mainly presented with spelling difficulties and math.

Because she was not formally identified, she had a great deal of trouble with Calculus, failing it twice. The worst thing about her university not taking into account a possibly unrecognized LD is that it threatened her scholarship and ultimately she was not allowed to take an honors poetry class because her GPA was so low due to her Calculus grades.

But Roxanne eventually found her niche in Anthropology which was such an enjoyable interdisciplinary field for her.

As a graduate student, Roxanne also found she did well in seminars that tended to reward deep and out-of-the-box thinking.

One of Roxanne’s breakthroughs in college was finding a mentor who encouraged her to design her own major.

Sometimes she had to argue for specific substitutions – like instead of Microeconomics which had a lot of mathematics, she took Poverty and Culture and worked taking life histories from homeless people which was more personally meaningful to her as well as relevant to solving real problems in the world.

Roxanne’s general predicament may be more common than we realize among students in this community. Degree requirements by their definition are mandatory; and courses, depending on how they are taught, may prioritize book learning, memorization, and exercises over real world creative problem solving.

If you or a student you know has had to leave a program over course requirements, look into the possibility of designing your own program or major or transferring to another institution that might allow you to do so. Roxanne was also able to sidestep the standard microeconomics course by substituting an independent study elect with a professor in her own discipline that she could talk directly to and have questions answered.

One of the most important take-home points I had after talking to Roxanne is that it’s important to know yourself, know what you need, and advocate for yourself when you encounter obstacles or roadblocks that weren’t designed for you.

Dyslexics, as a group, are strongly contextual and creative learners. They may need to learn through direct experiences and those experiences may ultimately be a source of their unique contributions to the world.